Skip to content
HomeIf you’re going to give a TED talk, better make it funny.

TED talks have been inspiring us for almost a decade now. Since June 2006, over 1900 talks have been broadcasted, and, in total, these videos have been viewed over 2.5 billion times. This does not even include all the TEDx talks.

But what makes a good TED talk? For this blog post, I wanted to examine this question in a data-driven fashion. “Good” could be defined in a number of ways, but here I will consider a “good” talk as one with a large number of views. In this post, we will examine top viewed talks and what distinguishes them the others. Data for this analysis was collected on April 19th, 2015, and the code to collect and analyze the data can be found here: https://github.com/fratamico/ted-analysis.

To start, let’s look at the how many views each TED talk has received. The following table shows a violin plot of the view counts of all TED talks by year. The vertical axis shows view count on a log scale (due to the large range of view counts) and the horizontal axis shows the years, with the leftmost column being a violin plot that includes talks from all years.

As you can see, each and every talk has been watched well over 10,000 times, with the least watched one having been viewed a whopping 45,000 times! So just by giving a TED talk, your message is bound to be heard by tens of thousands. In addition, there are very few talks that have been viewed over 10,000,000 times. In fact, only 15 have – that’s less than 1% of all videos.

Let’s look at what these 15 talks are:

From this list, it’s hard to see any commonalities. It appears we like talks by both men and women, talks on an eclectic mix of topics, and talks that are both older (2006) and more recent (2012). Not surprisingly, we do not see any talks from the most recent years, likely because they haven’t had a chance to accumulate as many views as their earlier counterparts.

To get a better sense about what is talked about, let’s look into the transcripts of what was said in each of those talks. These were also scraped in their entirety from the TED site, and they include audience reactions like Applause and Laughter. Below is the word cloud of the Top 15 TED talks shown above.

From this word cloud, it seems likely that in top watched talks the audience is laughing a lot and that the word “people” also shows up in many of the talks.  To better understand the context of the word “people”, let’s look at the words that appear around it in the transcripts. To do this, I grabbed all words within two words of “people”. The following word cloud displays these words. 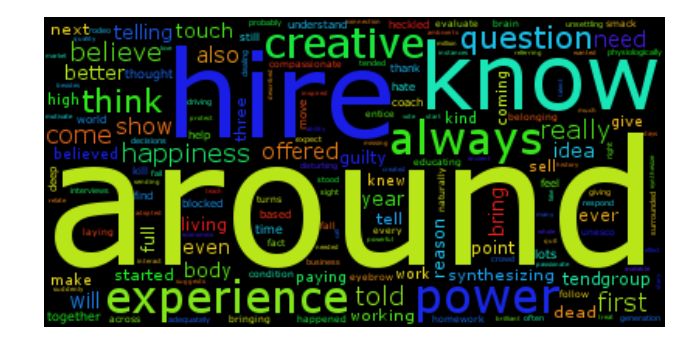 From this, we can see that when the speakers talked about people, they perhaps are discussing them in the context of how to interact with others around those people (“You will start aping the beliefs of the people around you” – Susan Cain: The power of introverts). Other topics include how to get a job (hire) or leadership type actions (power or experience). Further analysis need to be done to tell what exactly is being discussed.

To conclude this post, let’s look at the terms that appear with different frequencies in top and bottom talks, so that you know what to discuss and what to avoid. Of course, these conclusions are based on correlational results, so take their causality assumptions with a grain of salt. To calculate these terms, I used tf-idf. This takes into account the frequency of each word in a document (either top viewed talks or least viewed talks) relative to the frequency of that word in all other documents. The tables below show the top 10 words in the top and bottom 15 talks, ranked by tf-idf score. Therefore the words in these tables are ordered by “uniqueness” in one type of talk, relative to the other type of talk.

As you can see, top talks uniquely talk about general concepts like creativity and vulnerability. They also touch on juicy topics like orgasms. On the other hand, bottom talks mention common objects like fish and bread – words with a much more soporific effect. Looks like it’s much better to keep your audience enticed and not bored!

If you were to give a TED talk, I would recommend avoiding playing music and droning on for 5 minutes on a game theory lesson. But do talk about general inspirations for a person’s life (believe, create, etc.). And don’t forget to make it funny!